Enter your City name or Pincode

Baramkela is a nagar panchayat town located in Raigarh District of Chhattisgarh. It lies at a distance of 46 km from its district headquarters towards its southern direction while the state capital Raipur is located almost 209.01 km from Baramkela. The city is located at the latitude of 21.26° North and the longitude of 83.26° East. Furthermore, the boundaries of Baramkela are connected with nearby cities like Raigarh, Basna, Bargarh and Sakti. Besides that, Bhatti tehsil towards east, Pussore tehsil towards north, Ambabhona tehsil towards east and Sarangarh tehsil towards west also shares their borders to this town. The nearby villages to this town can be Jhanakpur, Hirri, Dabhara, Lodhiya and Sanda. Read here all the basic information related to Baramkela, Chhattigarh. 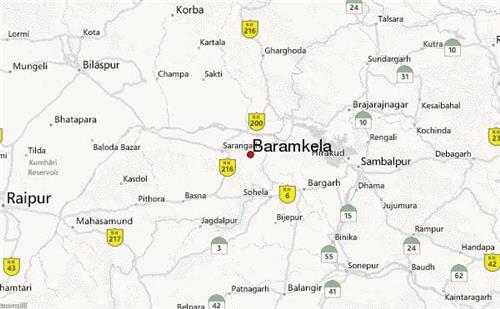 Baramkela experiences sub-tropical climate and generally remains very hot in the summer season while very cold during the winters. During the months of April, May and June temperature reaches more than 40°C. However, the average summer temperature here remains between 31°C and 42°C. On the other hand, the temperature goes down at an average of 17°C to 12°C especially during the months of December and January. The people of Baramkela enjoy monsoon season during the end of July that remains throughout August and lasts up to the first week of September. So, the ideal weather in this city can be described with the months of October and November.

Getting proper healthcare is the right of every individual. Whether it is an urban region or a rural area, well modernized medical functionaries, basic medicines and medical facilities need to be there to fulfill the health requirements of the people. Talking about Chhattisgarh, there are many areas where there is scope for improvement. The panchayat town of Baramkela in Raigarh is certainly one of them. It has very few health centers where medical treatments are provided to the locals. However, the lack of proper arrangements in medical field at this region sometimes becomes very difficult for the people to get ideal solution for their medical problems.

Like the healthcare services, the small town of Baramkela also has a less provision of communications, health, sanitation and improved public utility services. Postal services are the vital part of the services that offered to the citizens. This town also has a post office which offers services like mail post, speed post, fixed deposits and many more. It is a sub office branch with having head office in Raigarh and it comes under Raigarh Division Raipur Region, Chhattisgarh Circle. On the other hand, there are also few government and private banks available in Baramkela that serves the people.

Placed with having small population, the city of Baramkela is certainly one of those places in Chhattisgarh state where so much work on the infrastructure needs to be done. However, the people of this region are living with satisfaction with their near and dear ones but they always require a proper arrangement of their basic needs. Talking about the basic requirements, transportation is indeed among those fields where the administration of Baramkela has to look upon. The inhabitants here have to be so much dependent upon local transportation, as there is no railway station and bus stand here, for reaching at their desired destination. Similarly, the lack of adequate public utility services also effect the living of its residents. There is only one hospital here in which so much rush of the patients can be seen in regular basis. Banking services too need to be more advanced at Baramkela so that the people here can take benefits of various monetary schemes of both Central and State Governments. Overall, despite having low amount of infrastructure, the people of Baramkela enjoy their life peacefully and mutually.

Are you a Business Owner?

Add the products or services you offer